Entrepreneurs and Decision Making – A Step by Step Guide (Part 2)

In Part One, I talked about how becoming more self-aware as an entrepreneur can be the first step towards making better decisions. From this post came Rule #1 for any entrepreneur: Know that you are very different from most other people.

Part Two is all about how a better understanding of those who work for you can add to your decision-making skills. First, let’s start with a few more simple rules.

Rule # 2: Know that most people *hate* to make decisions

When my company started to get bigger and the need for more experienced managers arose, I did what most would do: I went out and hired really talented, experienced leaders who had a broad base of experience and scope of responsibility. At first, I expected these leaders to come in and really look to make things happen without needing a lot of guidance or direction. After all, hadn’t they done the exact thing I was hiring them to do on a much bigger stage?

Well, for the most part, these leaders did come in and make a real impact on the business. I was fortunate to work with amazingly talented teammates who helped drive the business in new directions and created opportunity that I would have never been able to see without their help.

But one thing really amazed me. I quickly realized that even the most seasoned executives would prefer not to make a decision if they could avoid it. To be clear, I am not saying these executives were fearful, timid or incompetent. Rather, it is just a fact of life that most people would prefer to have someone else make a decision for them in order to avoid the personal responsibility that comes with true autonomy or authority.

As an entrepreneur, the faster you recognize this and reconcile it to the findings in Rule # 1, the better off you will be.

One of my favorite Winston Churchill quotes says it all: 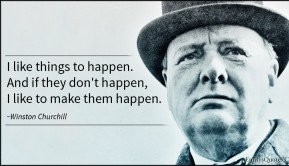 Perhaps this resonates with you as an entrepreneur. Just a little bit? You see, very few indecisive, creatively challenged, passive people ever become entrepreneurs. However, the world is filled with unsuccessful entrepreneurs (remember this isn’t an oxymoron) because they FAIL to recognize or account for this preference for action.

As a result, entrepreneurs get frustrated, impatient and behave horribly largely because things are not happening as fast as they want or a decision they thought was made keeps being addressed in discussions. I can recall many times in my early days as an entrepreneur that I failed to show up as the leader I wanted to be – and the vast majority of the time it was because shit was just taking too long to get done. This frustration was increased when I would look at the situation and think to myself, “didn’t we already make this decision? What am I missing here…”.

Note: it’s fair to say that the euphemistic phrase “not showing up as the leader I wanted to be” can be replaced with a more accurate phrase: “being an asshole.”  I was being a complete jerk, and it was really a result of the confluence of Rule #1 (I think differently), Rule #2 (others don’t like to make decisions as much as I do), and Rule #3 (I like action).

While these were some of my darker moments as leader (I’m pretty sure there were tears involved – and they weren’t mine), I finally had a moment of clarity that helped me understand the issue and learn an incredibly powerful lesson about decision-making.

What did I find out in this moment of clarity, besides that no one likes to work for @ssh#le??

In Part Three, I will share some key learnings – and how these insights enabled me to make better decisions and communicate these decisions in consistent way to the leaders working with me.