Entrepreneurs and Decision Making – A Step by Step Guide (Part 3) 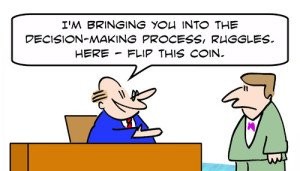 In Part One, I talked about how important it is for an entrepreneur to really reflect on what drove them to become an entrepreneur and how that very drive can impact effective decision making.

In Part Two, I focused on how even really strong and effective leaders can struggle to share the bias for action that all successful entrepreneurs embrace everyday.

Now it is all about how my learnings – especially when I came off repeatedly like a complete jerk – helped me become a better decision-maker, communicator and leader. Hopefully you, as an entrepreneur, can skip some or all of the being-a-jerk part of your journey. First, let’s cover Rules #4 and #5…

Rule # 4: As CEO, you don’t have to make all the decisions – far from it. But you MUST be clear about what decisions you are and are NOT making.

This seems incredibly, painfully obvious – and it is. But I see the same mistake time and time again when I am helping entrepreneurs scale their business. The key to scale isn’t to making or not making all of the decisions. Rather, the key is to be clear with your team about where you stand on these key decisions. Notice the subtle difference?

In the early days of starting a business, this really isn’t a problem. The company is small. You are in charge. And the command and control model works, largely because of organizational simplicity. But with increased complexity, it can become hard to even know when it is decision time, let alone who is making that decision. I disagree with those who say that empowerment is the only way to scale a business. Who do you think makes most of the key decisions at Oracle, even with 50,000 employees? And many great, large organizations operate with high levels of autonomy – think of Google – and do so with great success.

I am not trying to develop a new leadership model here (the world has plenty already). Rather, I want to help entrepreneurs develop a simple way to communicate how they view decision-making so that the rest of the organization understands just what mode you are operating in as a leader. Here is the vernacular I established with my team that made all of this much, much easier.

Rule #5: Establish your own framework that your team can follow

After any spirited conversation, either in a 1:1 or with a team, I began to institute what I called my three bucket rule. You see, I have a high degree of energy, can argue just about any point, and can do so with complete conviction. But sometimes I forget the conversation the moment the meeting is over, and other times I feel commitments have been made. How is a leader – working tirelessly for me – to know what is what? Here are my three simple buckets:

These are discussions in which I presented an idea, engaged in a robust brainstorming session, or shared my perspective regarding a decision at hand. However, in my core I really didn’t care what decision was made and entrusted the executive completely (no passive-aggressiveness here) to make the decision without any further consultation. In fact, for most of these discussions I forgot what my point of view was a few minutes after the meeting. But rather than making the executive guess if my enthusiasm for a particular alternative was fleeting or heartfelt, we developed the term WAI. As in, I loved the conversation, I was happy to share my POV, but in the end it was in the WAI camp and the executive was free to do as she pleased when the meeting was over.

These are debates were I felt very strongly about the direction we should take or the decision we should make.  However, I wasn’t 100% yet and therefore was open to debate and consideration. For example, say we were debating a new product-naming category, and I had emotional attachment to one of the alternatives. My job as a leader was to make this attachment known as part of an open dialogue. It was my responsibility to finish the discussions with this type of statement: “I want you to know that I feel very strongly about path A. And while I am not telling you to go with path A, I would like to know beforehand if you decide to go in a different direction. Please don’t assume that this decision has been made without checking back with me first.”

I have made a decision here, and I would like you to get on board with it. I am happy to discuss how I got to my decision and the alternatives that I considered, but the time for continued dialogue is gone, and it is time to move to action. As a leader, it is important to be clear and firm here – avoid the temptation to use bucket #3 if you are still uncertain about the path forward; you will only confuse your team more about future decisions. I didn’t use bucket #3 that often, but when I did I was very clear about it, and my team recognized that it was time to move to action.

Rule #6: Communicate Rule #5 openly, and ensure that you and your team follow it consistently

On the entrepreneur’s journey, nothing will burn through a team faster or drive you crazier than inconsistency around how decisions are made and who is making them. You simply don’t have time to spend cycles going over and over the same ground multiple times. Your competition will kick your butt while you are busy empowering leaders or revisiting a decision for the fourth time. As you develop your own vernacular here, I would suggest one other framework to bring to you team. We called it “debate / close / commit” and it was the finishing part of this framework. Simply ask your team to live by the following maxim for decision-making:

“We will debate topic x in an open fashion (DEBATE). Once I feel the discussion has reached its conclusion, I (or we) will make a decision (CLOSE). Once we make this decision, I will ask each of you to commit to its execution and avoid revisiting the decision until we have enough data or information to warrant it (COMMIT)”.

By utilizing some or all of these rules, I believe you can save time, energy and cycles – and focus on the really important things like customer satisfaction, beating the competition, and scaling your business. It hopefully has the added benefit of allowing you to walk around your office without having to see good old Frank hanging from the rafters, still trying to figure out just where it all went wrong…