Entrepreneurs and Decision Making – A Step by Step Guide (Part 1) 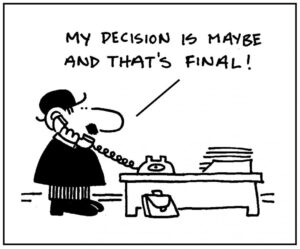 “Mike is filled with a whole lot of ideas, some of which are not complete shit…”
– David Kennedy, my dear friend and my business partner 2001–2008

You are a fellow entrepreneur, right? If so, you’re blessed a level of creativity that generates an amazing number of ideas, some of which may actually be good. And, if you are anything like me, you want to see those ideas turn into action as quickly as possible. After all, that’s what drove you to quit your job, stop dreaming about a business idea, and actually move forward with making it happen.

However, as your business gets off the ground, you might notice that your dogged commitment, unceasing drive, and preference for action are starting to backfire a bit around the office. For example, you’re fully aware that consensus-building and getting buy-in from your team are really important, but doing that takes patience, debate and a thorough process: three of the things you hate most about running a company.

Heck, if you liked those things, odds are you would have stayed at BIG COMPANY X and never set out on the entrepreneur journey in the first place, right?

Normally at this point in some business book or blog, you (as the entrepreneur) would expect to see some big caution sign that screams STOP! Or, more subtly (with an imaginary deep voice speaking slowly), a VERY SEASONED CEO FROM a FORTUNE 500 COMPANY X will say “listen here great visionary, you must empower your team to become all they can be to enable scale in the business.

Or maybe one of your board members gave you my all-time favorite management 101 maxim:

“make sure you give your team just enough rope…”.

I HATE THAT ONE MOST OF ALL! 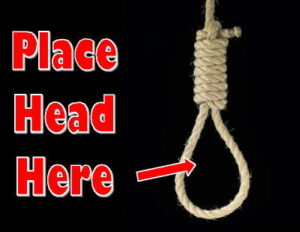 And what leader wants to walk out of a meeting with images of failed executives hanging from the gallows? Was I supposed to point to the recently deceased and say to my team: “see, don’t be like Frank here, he took it a little too far and look what happened…”.

But I digress…AND I am not going to give you that same advice. You need some simple rules that will help you when talking to your team about decisions. Here is what I learned along my journey.

Rule #1: Recognize that you are very different

Think back to your early career experiences and try to remember what it felt like when your boss told you what to do.

Did you simply say “ok, I will do that” based on her experience, job title, or the simple assumption that she knew more than you did about what needed to be done?

Or did you bristle just a bit and question the mandate? Perhaps you thoughtfully suggested an alternative plan of attack, or – if you’re like me – you nodded your head, walked away, and did whatever thing you thought was best.

If I look back on my early, pre-entrepreneurial work experiences I note that most of the time it was filled with conflict, angst, and pushing back against authority. Even though I was consistently ranked highly by my employers, rarely did I fail to have some sort of run-in with one of my so-called superiors about decisions, my scope of responsibility, or the overall strategy of the team, group or firm. 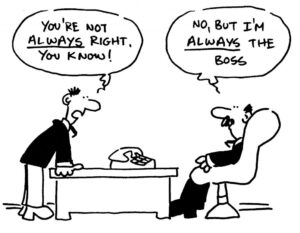 Heck, I recall my manager at my very first job out of college (at Ernst & Young) becoming so infuriated with my constantly badgering him that he yelled at me “Goddamn it. Don’t you know your role? You are a first-year auditor – your job is to tick and tie, your job is not to question why” – and then refused to talk to me for the rest of the day.

I remember driving guys like Marc Andreessen and Ben Horowitz nuts when we were starting Loudcloud (which became Opsware) – constantly challenging their decisions and questioning every aspect of the company’s strategy, despite having never been at a startup or worked directly in the technology industry before. And these two guys had just sold Netscape for $10 billion dollars….

I bet you have a similar set of experiences, because as an entrepreneur your first key to decision making is realizing just how different you are from most others.

Simply put, your brain is wired in a way that makes you challenge the status quo – which is absolutely critical to being successful. But it is just as important to realize that very few other people think about the world the same way you do.

The next step is gaining awareness about all those “other people” (also know as your employees) – and learning how you can use some simple observations to make better decisions.

That is what Part Two (next Wednesday, June 10th) of this series will be all about…